This article is the second in a two-part series of voter guides leading up to the Nov. 6 midterm elections.

Hover over the plus signs in the graphic below for a summary of the propositions and then click on the embedded link for more information about the campus and public debate. 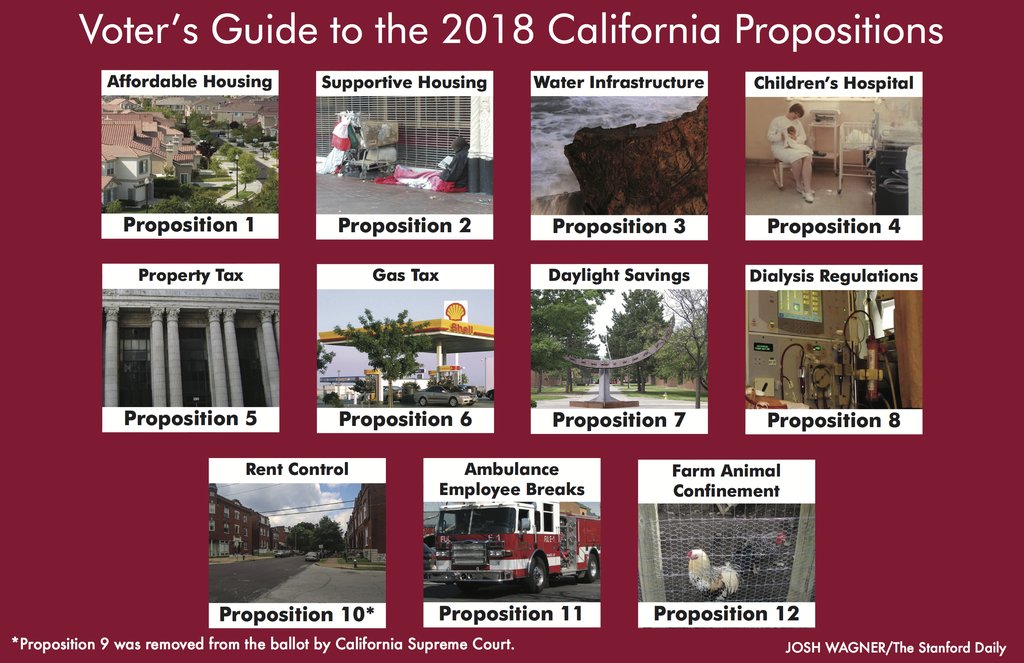 On Nov. 6, California’s voters will weigh 11 ballot propositions in addition to electing officials and representatives to the House and Senate. Billions of dollars are at stake as voters decide whether to direct money towards affordable housing, road infrastructure, children’s hospital and other initiatives. If passed, the propositions effectively alter the law under California’s Constitution.

Though the propositions number one through 12, only 11 propositions remain on the ballot; the California Supreme Court removed the Calexit-inspired Proposition 9 from the ballot in July. The measure, which asked the government to divide California into three states, reportedly raised  “significant” questions about its legal validity.

4 out of the 11 propositions on the ballot are bond measures, which ask voters to approve or deny additional funding.

As of early October, 1,214 Stanford community members have registered to vote, StanfordVotes co-director Antonia Hellman ’21 reported to The Daily. This marks a significant increase from last year’s midterm, where 800 people registered from Stanford.

Voter enthusiasm for the 2018 midterm elections is also unusually high across the nation, according to a new national survey by the Pew Research Center. Political analysts, citing the high primary turnout, suggest that the Trump presidency has spurred the surge of self-reported interest in the elections.

Following The Daily’s coverage of local and state races, this voter guide breaks down each of the 11 propositions and gauges the current political and campus debate surrounding them.

This table illustrates the positions of California’s Democratic and Republican Parties on the November 2018 ballot propositions.