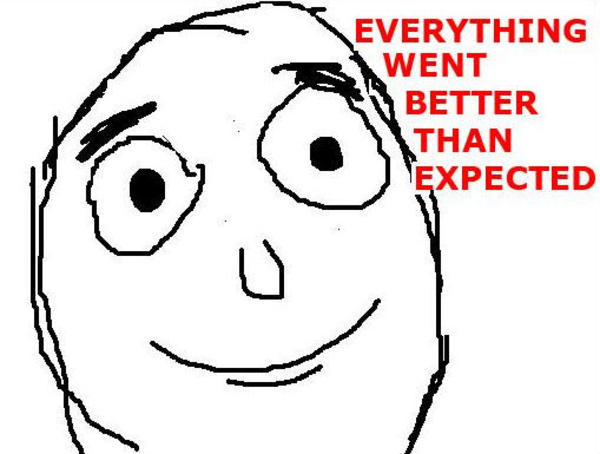 In replacing Montgomery, who accounted for five return touchdowns in his Stanford career and earned consensus All-America recognition as a returner in 2013, the Cardinal found some guy named Christian McCaffrey to return both kicks and punts last year. All he did was tally 1,070 kickoff return yards (28.92 yards per return — eighth in the country) and 130 punt return yards (including a punt return touchdown in the Rose Bowl) to help him set the single-season all-purpose yardage record. He’s back this year.

In replacing Williamson, the all-time leader in points scored in Stanford football history, the Cardinal found a gem in senior Conrad Ukropina, who had been overlooked by fans after a forgettable cameo in 2013. When the dust cleared, he finished third in the country in field goal percentage (18-of-20), including a 13-of-14 mark from beyond 30 yards. He’s back this year, too.

All that’s to say: Just about every major piece of a special teams unit that proved to be a huge asset to the Cardinal last season will return this year. Now, nothing in college football is a sure thing, but I’d say that there are few programs in Division I college football that wouldn’t gladly trade their returner for McCaffrey, or their placekicker for Ukropina.

Stanford is in wonderfully good shape this season, with the only problematic area being kickoffs, where the Cardinal couldn’t decide between Bailey and Ukropina last season, with each having his own pronounced difficulties at the position. If one of those guys seizes the job and shows improvement, you really can’t poke any noticeable holes in this unit — at worst, it’s serviceable, and at best, it’s a major asset.

Conrad Ukropina (K) — Ukropina didn’t exactly endear himself to Stanford fans when he briefly filled in for an injured Jordan Williamson in 2013. Playing in front of his hometown crowd at the Los Angeles Memorial Coliseum and in front of his vociferously pro-USC family, he had a 30-yard field goal blocked late in the game. Stanford went on to lose by three points and fell out of BCS contention as a result. Upon Williamson’s departure, Ukropina promptly went 0-for-3 in the Spring Game, causing a panic among Stanford fans who were desperately seeking a solution at kicker after Williamson’s inconsistent four years.

Turns out, the answer was right there all along. The Spring Game turned out to be an aberration for the man that turned out to be the most accurate kicker in Stanford history, which is why behind the scenes, Ukropina had the full confidence of his coaches all along, even with Stanford fans calling for Bailey, the freshman, to take the kicking duties. Ukropina rewarded his coaches for their confidence as he started the year 5-for-5 (including a 52-yard kick against UCF, longer than Williamson’s career-long, and a 46-yard kick to ice Stanford’s then-upset of USC) and only missed a shanked chip shot against Oregon State and one more field goal against Oregon all season. He capped off a memorable senior season with a 45-yarder against Notre Dame as time expired to finish an improbable comeback on Senior Day, cementing his status in Stanford lore.

This time, there’s no question that he’s the starting kicker. The only question is whether he’ll take kickoff duties as well after failing to impress in that role last year, with his below-average leg strength causing only seven of his 31 kickoffs to go for touchbacks. He’s reportedly worked hard all offseason on improving the distance on his kickoffs — and we’ll quickly see if that paid off.

Alex Robinson (P) — Robinson started off his first season as Stanford’s punter with a bang, booming seven punts for 322 yards (averaging 46 yards per boot) in the Cardinal’s season-opening loss to Northwestern (he was really the only highlight of that game for Stanford). Fortunately for Stanford (nothing against punters, really), Robinson never again saw that much action after the Cardinal’s offense caught fire in a memorable 2015. Though that Northwestern game showed off Robinson’s potential, he was inconsistent throughout the season in his role as Stanford’s “normal punter,” and as he reprises that role in 2016, he’ll be tasked with improving the reliability of the distance on his kicks, as his hangtime has never really been in question.

Jake Bailey (P) — When he first arrived on The Farm as a true freshman, many Stanford fans expected Bailey to be used as a kicker to fill the void of the departed Jordan Williamson, but Stanford’s coaches instead decided to use him as a punter to complement Robinson. Bailey assumed the “sky punting” role — that is, punting while inside opponents’ territory to pin them back inside their own 10-yard line — as he proved to be more adept at that skill than Robinson. He was solid in that role, thanks to a solid coverage team helping him out, and he’ll reprise that in 2016, again splitting punting duties with Robinson after an extended competition for a full-time punting role during training camp.

But where Bailey can really stand to improve this year is in kickoffs, where he really struggled with consistency last season. Although his leg is stronger than Ukropina’s for sure, he knocked a whopping six of his 65 kickoffs out of bounds (that’s a 15-yard penalty, folks!). Given Stanford’s young secondary and unproven inside linebackers, allowing opponents to start at the 40-yard line instead of the 25-yard line can make a huge difference, and if Bailey is to win the full-time kickoff role (which is still unsettled), he’s going to need to really have improved the directionality of his kicks over the offseason.

C.J. Keller (LS) — Keller assumed the field goal snapping duties as a true freshman in 2014 after Reed Miller struggled with his consistency, and has been about as good as Stanford could have hoped for since. You only really get noticed as a long snapper if you mess up, and the fact that Keller was barely noticed last season, then, is a good thing, as he and holder Dallas Lloyd didn’t botch a single snap and set a good rhythm for Ukropina, helping out their kicker’s consistency as well. After a battle this training camp, Keller also won the punt snapping duties for the first time in his career, beating out true freshman Richard McNitzky, the nation’s No. 2 long snapping recruit, for the honors. Keller has long been as consistent as they come, and don’t be surprised if you forget about him — that’s the goal for a long snapper.

Dallas Lloyd (HLD) — Lloyd is almost certainly the only safety in the nation that also doubles as a holder (most holders are either quarterbacks or punters). Lloyd first worked at holder behind punters Daniel Zychlinski and Ben Rhyne when he arrived on The Farm, which wasn’t yet unusual, as he was the team’s third-string quarterback at that point. But when he switched to safety as a junior, he continued to work at holder and assumed the full-time role last season upon Rhyne’s graduation. He takes great pride in his consistency as a holder and is probably not too far behind the automatic Zychlinski in his technique. Given his background as a quarterback, Stanford fans have long been waiting for Lloyd to take off with the football on a fake, but that hasn’t happened — yet.

Christian McCaffrey (KR/PR) — McCaffrey will reprise his role as the starting kickoff returner and punt returner for the second straight season, as his combination of reliable hands, straight-line speed, acceleration and shiftiness is simply unmatched by anyone on the team — especially after an offseason of conditioning. Although some have argued that McCaffrey should be held out of special teams work because of the injury risk and how important he is to the offense, David Shaw and special teams coach Pete Alamar have always been of the mindset that the best players should always be playing on special teams — regardless of where they fit into the team’s offense or defense. Special teams is, alongside offense and defense, an equally important facet of the game, after all — why not treat it like one? You saw the numbers in the introduction, and you saw his field vision in his return touchdown in last year’s Big Game, his near-return touchdown in the UCLA game, and the punt return touchdown in the Rose Bowl. He’s a proven commodity back there, and there aren’t many in the nation that can do what he does — when opposing teams dare to kick to him, that is. Many teams will instead choose to use short kickoffs to avoid McCaffrey altogether. Even when he doesn’t touch the ball on special teams, his presence is felt.

Newcomers to watch for

Nobody! The competition between Keller and McNitzky at long snapper will presumably continue into the season (Alamar continues to evaluate his specialists as the season unfolds, and no spot is truly safe) but the job is really Keller’s to lose at this point.

Reed Miller (LS) — A four-year starter at long snapper for the Cardinal, Miller graduated upon the conclusion of last season and will return to the program as a graduate assistant in 2016 as he finishes his coterminal master’s degree in communication. Miller snapped on both field goals and punts starting his true freshman season in 2012 and held onto both roles before losing the field goal snapping role to Keller halfway through the 2014 season after some inconsistency, particularly in the Cardinal’s tough loss at Notre Dame Stadium that year.